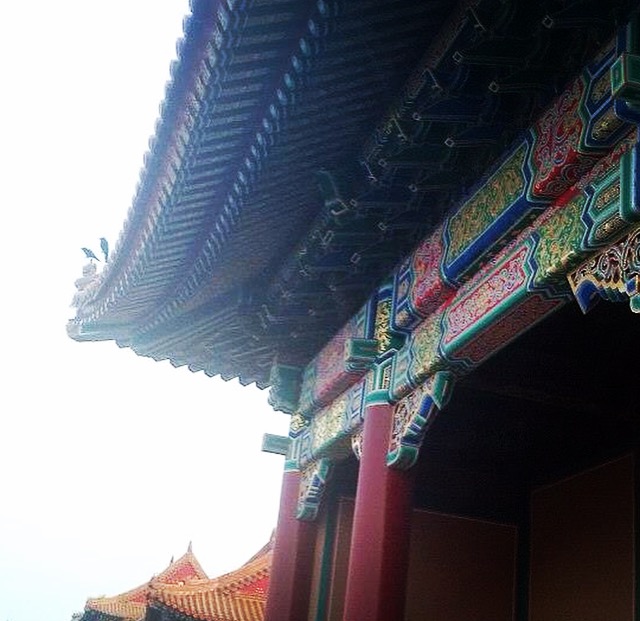 China was on of the craziest, amazing, culturally astounding experiences of my life & I am truly blessed to have had this opportunity.

I mentioned in my Who What & Why page about myself, that I often credit luck for almost accidental adventures or additional experiences.  If there was ever an example of this, it was China.

I was sitting in a Sixth Form French lesson when I was called out. A teacher had knocked on the  door & asked to speak to me outside. My brain immediately went, ‘Shit, shit, shit what did I do, what have I said’ etc (being newly Head Girl it was usually about “inappropriate” dress code..:/). However,  I couldn’t have been more wrong. What actually happened was, I was given a fairly to-the-point proposition:

“Do you want to go to China for two weeks in November? It’s free, you won’t have to pay anything.”

I was confused, obviously. She went on.

“I don’t speak Chinese.” was my blunt & frankly panicked retaliation at the thought of blagging my way to China only to stand before a selection of fluent Chinese Judges & realise I knew precisely zero Chinese words. Literally, unless you count the name of my local (& the world’s best) chippy, ‘Wongs’ Supper Bar’, my brain was completely devoid of the minutest scrap of Chinese vocabulary. But surely she must have known that I didn’t study Chinese? I mean, unless I was struggling with my language A Level significantly more than I thought I was, I had definitely just left a French lesson.

However, she explained that it there were two girls in the  year below who were entered & me and another Senior Prefect who also studied a language would be the ‘support team’. In short, travel, all expenses paid to China, celebrate my 18th birthday there & not even have to do any work for it. Well, I think you can tell what my answer would have been.

Obviously, I was absolutely ecstatic & accepted immediately. So, it was mentioned that there would be a speaking competition with people from different countries from all over the world, all paid for, in China. What wasn’t mentioned however, is that the four of us were representing the whole of the UK. And, it was a TV show. A hugely popular, bat-shit kray, Chinese TV show.

I have a very distinct memory of my realisation of this moment. Arriving in Bejing, there were camera crews waiting as a whole host of us from different countries came out of the airport. Excited, I started frantically looking around to see if any celebrities were near by. Then I noticed that they following us, filming us. These camera crew became part of everyday life in China. They were constantly filming us & it was strange how quickly we got used to them & within a day or two we just forgot they were there.

The first few days of our trip were in Bejing. There really were 9 million bicycles (maybe more), but I maintain my argument that the Great Wall of China has been grossly misnamed & should instead be known as (although I’m yet to contact Trading Standards), the Great Steps of China. Though, to be fair, some of the individual steps were walls in themselves. I (perhaps naively), had envisioned a leisurely stroll along a reasonably level bridge-like wall. Instead, it was a never-ending hike up stone steps and crevices, every one less level and even than the last.

But wow, was it worth it.

I was in completely breathless in awe (although that could arguably be also contributed to the strain of the trek), to see one of the wonders of the world myself & I just couldn’t get over how huge it was!

The only slight drawback to my experience was that I had skipped breakfast, as the hotel selection was stewed meat & rice. It wasn’t the continental option I had expected but I thought I’d give it a try all the same; carpe diem & all that. Unfortunately, my semi-adventurous spirit was not rewarded, as when I spooned out the pot marked ‘Chicken’ I was greeted by the entire clawed foot of a chicken. This somewhat suppressed my immediate appetite.

Anyway, back to the wall / steps / big, stone wonder-of-the-world. So we’re all climbing, trying to get further & higher & see more & more, when I start to feel really hot. I take my jacket off but now I’m feeling like I’m going to be sick & getting pretty light-headed. Being prone to the occasional faint, I realised what was about to happen & managed to get to a little platform before collapsing. It was all a bit fuzzy but I remember two Russian tourists supporting me & trying to get me to drink from their hip-flask, insisting it would help. Luckily, my teacher saw me & thanked the tourists, returning their hip-flask before I could end up drinking it (turns out it was straight vodka – only the Russians). However, once I’d had a sit down & was feeling normal again, I really began to take in where I was & looked up to see the winding wall stretching and dipping and curling round the mountains as though cutting through the sky itself. I took numerous photos, but it just didn’t quite seem to do it justice.

We also had the chance to visit Bejing’s Forbidden City & be given a tour. Our tour guide was called Sasha &, as she, herself explained;

“Sasha is not my name, but I like it so I chose it! So all follow Sasha! Try not to get lost, but if you lose Sasha just look for a Chinese person, which is easy because my face looks like all other Chinese! Ahahahaha!”

Nobody was quite sure if it was appropriate to laugh at this remark, but clearly Sasha thought it was hilarious & was the loveliest tour guide I’ve ever met. Sasha continued to talk about herself in the third person, a habit I haven’t ruled out from adopting, & was really knowledgeable. She told us that the two big lions which are always either side of entrances are always one male & one female. You can tell

them apart because under the paw of the male will be a ball, which represents power, & under the paw of the female is a little baby one, as the maternal figure (as an ancient tradition I though I’d let the gender stereotyping slide & didn’t let it wound my inner-feminist too badly). I love this little snippet of information because I use it every time I pass a Chinese restaurant or China Town to impress others with my extensive knowledge (anyone I ever tell this to in the future please try to look surprised & impressed by my intellect on this subject).

The Forbidden City itself was amazing as we were still there as the sun was beginning to set. Someone had been told off for trying to take a photo of some of the guards who were around, so naturally everyone tried to get a photo of them on the

sly. I managed to get on in the distance with the sun setting behind the walls of the city. The place itself was very traditionally ‘Chinese’ as you would perhaps expect, but so much more beautiful. The reds & golds & colours had so much depth & all the details of the roofs & walls were so intricate it was astounding.

In our few days in this amazing city we were treated to a show over dinner in a beautiful restaurant with singers & dancers performing as we ate. The tables were, as they were almost always during the rest of our trip, large & round with a rotating, circular platform in the centre. At this particular restaurant, the platform was glass and contained dishes of foods I had never seen in my life & to this day am yet to see again (besides rice, that, I confess, I have encountered since). There was also no western cutlery at all, so if you wanted to eat, you had to learn how to use chopsticks quickly. This proved impossibly difficult before becoming very suddenly insanely easy. At one point in my earlier inexperience, I had resorted to stabbing the food savagely & trying to get it across to my plate as quickly as possible. The aim was to accomplish this before it fell into the no mans’ land which was the increasingly food-soiled table-cloth surrounding my plate’s perimeter. This amused a nearby camera-man to no end & he begged me to do it again so he could get it on film. Not wanting to let my nation down (I know, thank me later), I forced myself to try once more and triumphed. By the end of the dinner, I was even able to pick up a teeny, little, slippery quail’s egg (I say quail because it was small but it was really probably the egg of something much more exotic/potentially disturbing), of which I am yet to receive the winnings from for a bet concerning this triumphant venture.

One of the other things which I was picked up on for by the locals, was my height & blonde hair. Blonde hair is obviously quite different & must be quite really interesting, so I understood the stares. However, at 5″9, I was significantly taller than most males, never mind the women. This meant that the stares usually started at my feet and worked their way up in astonishment as one who had unexpectedly encountered King Kong or the BFG, before encountering a double-blow as their gazes were met by startling blonde hair. My reactions to this varied between discomfort, repressed albeit very mild offence at my freakishness, before settling firmly on sincere amusement. I honestly believe I have made frequent appearances in the November 13 album entries for a generous proportion of Chinese families. This is because I was regularly dragged (quite literally & without a word, only incredulous grins & the blonde BFG amazement), to join in group photos or else just have them taken overtly & at incredibly close-range as I passed by. However, I quickly became accustomed to this as I was made distinctly aware of my unfathomable growth early on. This was when I first met the guide who would be accompanying the UK supporting half of the team. I came out of the lift and introduced myself, only to see her turn around in amazement, begin by staring at my feet & working her way up in astonishment (a routine I was soon to be well-accustomed to), before actually shielding her eyes from the lights behind me & declaring;

After Bejing we flew to Yunnen Province, to begin the competition & this was where my true, unforgettable experiences & moments I will forever treasure took place in Kunming.

0 thoughts on “Bejing – How I Ended Up on Chinese TV”