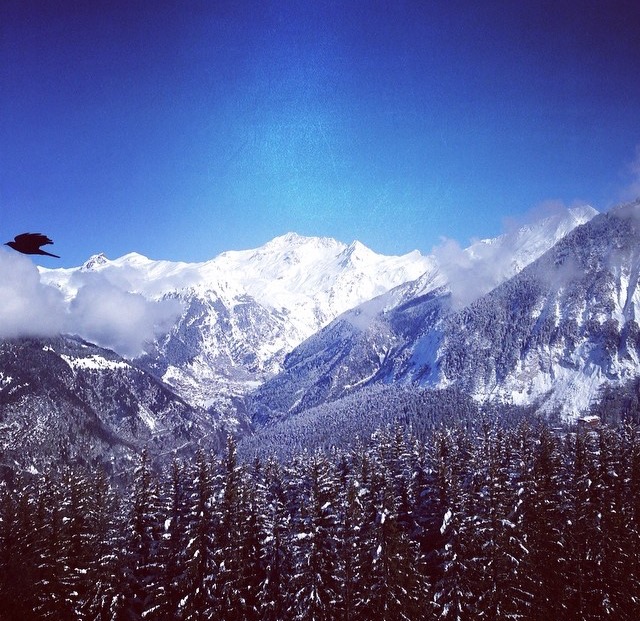 This is a continuation of my adventures from Courchevel (Feb/March).

We had a period of without guests so we had a bit of sporadic time off, as we were still having to do the three apartments. We were also constantly redressing & perfecting the chalet for viewings but we still managed to sneak out

every now & then. One of the hotels has a big terrace on the top of the mountain which was lovely to sit & get a drink in because the weather was getting warmer & sunnier by the day.

We also got to see the annual fireworks competition in which all the resorts up the mountain compete in. We arrived expecting to see a crowd waiting for fireworks to start, but there were loads of people gathered around one of the big slopes & it was all lit up with stage lighting, a commentator & music. There were people kicking the show off doing tricks & formation skiing down the slope. At one point there was this bright, gold light at the top of the slope, which started advancing forwards extremely quickly. It appeared to be gold, sparkler fireworks attached to something on skis. That something turned out to be a person. A human, skiing, sparkling firework was hurting down the ski-slope, much to the audiences’ applause.

All the other skiers from the show then came out in a line with flaming torches & we looked over to the mountain to the right of us & saw hundreds and hundreds of little lights which turned out to be more skiers coming slowly down the mountain in formation. They were holding the same flaming torches & were led by snow ploughs shooting fireworks as they moved. As if the spectacle needed any more impact, they then used really powerful X Factor-style music which made the whole thing as dramatic as it was breathtaking.

You’d think that that would be it for these extravagant exhibitionists, but as we looked up we saw something coming across the sky. Was it a bird? (sorry for the cliche here but I couldn’t resist so I shall continue all the same). Was it a plane? No, well, kind of. It was a glider. A glider shooting gold sparkles over our heads, no less. Some casse-cou (daredevil), was now gliding over our heads showering the sky in glitter to slow, emotional music.

You may remember (or may not, we’d certainly forgotten by now, few distractions & that), that this was supposed to be a firework display. Well once all these dramatic spectacles had subdued, the fireworks started. They were huge & filled the whole sky in a way I’d never seen before. I’m a huge fireworks fan (on my very limited list of top favourite things), so I was pretty impressed but even if you’re not one for those sort of displays you’d probably still enjoy that one.

Back at the chalet itself the next day, we got a phone-call saying that we had had interest from a Sheik & his family who were staying at a hotel in town. To keep him happy, me & the other housekeeper had been offered as babysitters for their children, in the hope that they might be encouraged to take the chalet. We were also told we were being collected in 5 minutes. Being in the pool at the time enjoying some time off after cleaning the apartments all morning, we had to get ready pretty sharpish. I threw my hair into a bun & blasted it over the top with a hair-dryer hoping nobody would notice & we made our way over to the hotel.

When we got to the hotel we were taken to their suite. A little girl no older than 4 opened the door and said firmly,

before we got a toe over the threshold. The wife of the Sheik invited us in & was very lovely. Unfortunately, there seemed to have been a lack of communication in which presumption had prevailed. She had no idea we had been volunteered for the role & seemed to presume we were full-time, qualified au-pairs. She assigned us a child each & launched immediately into instructions which entailed us to be with them at all times, beginning early the next morning. We were only to speak to the children in fluent French (we don’t speak fluent french), would take the children to the mountains & teach them to ski (neither of us have ever skied in our lives & my only experience in the snow involved me losing my board & falling on

my ass down the mountain). We made a couple of awkward glances to each other & tried to smile politely & nod although we were getting seriously confused. We rang our manager as soon as we left who was equally baffled & said he had only agree we would babysit for that evening if they took they chalet, which they had no intention of doing but we had a good laugh about it when we got back.

We might have not got a booking from that shiek, but we did get one from another one, instead. He & his people hired the chalet but only for the evenings/nights to have parties & insisted we moved out from downstairs! They only needed people to tidy up after all these parties so the masseuse & service joined in as well.  We used to come back in the mornings and there would be ash and cigarettes everywhere, burnt holes in the furnishings, wine stains, smashed glass & just about everything else. They weren’t supposed to have anyone staying in the rooms but the driver decided to take one for himself and next thing we know some other employee has taken the master suite & comes bursting out, hungover in his boxer-shorts shouting about coffee as he streaked past us all calling apologies over his shoulder. A bit awkward I must say but extremely amusing for all the same.

The only bonus was that whilst they were staying in the chalet, we got to live in the nicest of the other apartments our company own in the town. It was luckily free that week & it was gorgeous. We had so much space & each had our own bedroom with TVs & beautiful views. We were right in the centre of the town (rather than having to climb the ski-slope to get back or walk forever round & round up the mountain). Unfortunately, the new guests needed to move in so we had to move down the mountain to staff chalet. As it was approaching the end of the season, the chefs, chauffeur, service & masseuse left as they weren’t needed, leaving only me & the other housekeeper. The rooms were more like a dodgy brownie camp hut & the floor was stone. Our toilet had no light bulb, the glass in the fridge door was broken & we had regular ‘girl’ melt-downs from all the spiders  – a bit of a step down from our million euro apartment.

down the mountain & closer to our favourite bar so we went out every night just to get away! The other housekeeper was amazing fun & we had some great nights out with other seasonnaires who were always about. On one of the nights we went out for a few drinks, we ended up missing the last bus home. Having missed it, we decided (stupidly), we could just get a tax home. We ended up trying to walk all the way up the mountain at 4am thinking we could call one on the way. Unfortunately, French taxis don’t tend to pick up people who say they need a lift from,

‘Somewhere up the mountain between La Tania & 1650’

and can’t even speak in the same language. After what felt like hours, we finally got a lift & made it back to the staff chalet. Relieved, we opened the door only to find our manager standing at the bottom of the stairs waiting for us. Apparently I’d been “quietly” explaining (repeatedly & not that quietly), that we needed to keep our voices down in case we woke anyone up…

Luckily, he thought it was funny as he always said that as long as we worked well at the times we were supposed to he wasn’t bothered what we did in the time in between. Whilst these guests were taking the chalet for just the night we only had to work during the day (rather than starting again in the evening until late), as they were just the main rooms to partaayy. It felt like we had so much free time (despite working all day, 7 days a week…), so we made the most of it, going to band nights, seeing the town in the sunshine (it was staying light later & the snow was slowly beginning to disappear), & we also went round to one of our friends’ chalets for a fish-finger butty night.

We moved back to the chalet where our floor felt weirdly empty with just the two of us living there. But it meant I was back in my own spider-free room! We got a new booking for a big extended family with some really cute kids & they were all really friendly & polite. The first time we had finished one of the bedrooms one of the guests ran after us & thanked us for doing his room so well (we’d had guests barely acknowledge we exist before, never mind thank us). It was back to working the long hours again but at least they were lovely guests. These last few weeks of my time in Courchevel seemed to go so quickly & before I knew it we had our flights booked home.

Leaving was bitter-sweet. I had got so used to my narnia-like surroundings I almost forgot to appreciate the fact it wouldn’t be around me everyday. I also knew I’d miss the people I’d met there,sneaking up to the top kitchen when

everyone was asleep to get the best ice-cream,  the hilarity of tipsy-treks up the snowy slopes, creeping through the side-door without the guests hearing us, the sun shining down over the snow & standing on the balcony of the master bedroom & looking at out at the clouds in front and even below me as well as above.

I was sad to leave everything behind but I definitely appreciate the opportunity. Although I have mentioned a lot of the fun stuff, we were still working ridiculous hours for seven days a week. Chalet work (6 star place or not), is tough with a lot of responsibilities but I was lucky enough to gather some amazing memories along the way.

My family all came to pick me up from the airport & I was treated to my favourite dominoes & champagne (unusual combination for some but I was thrilled). I had a good few weeks at home before I was off again for a few days in Paris before going straight onto my new job in St Tropez.

If you are thinking about doing a ski season, I would definitely do one. If you want to save money but don’t mind working more & not skiing/boarding that much, then working somewhere like I did is probably your best option. If you want more free time & fun on the slopes (but less wages), then more typical chalet or hotel work is probably more what you should look for. I’m by no means an expert, but my advice would always be to just take any opportunity you can & just try something different, even if it means a one-way ticket to the top of mountain with only a day’s notice (because that was one of the best decisions I’ve ever made).