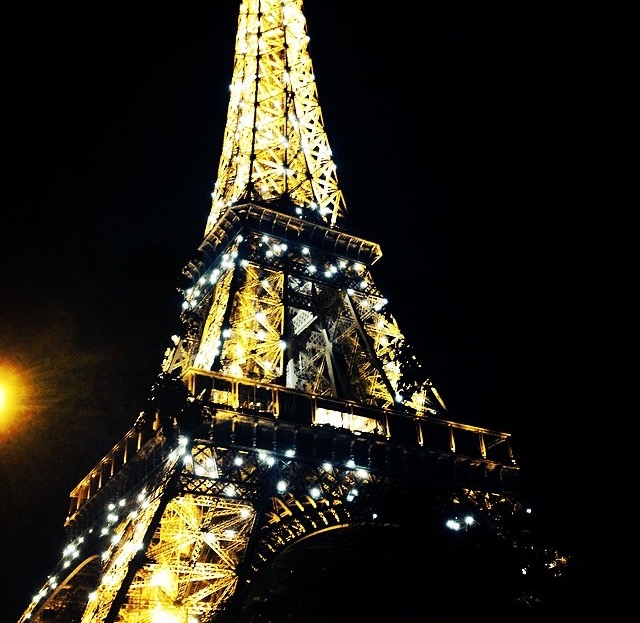 Before starting my Summer in St Tropez, I flew to Paris with my then boyfriend for a little break before going straight onto St Tropez. I’d had a few weeks at home since returning from Courchevel & I actually knew when I would be leaving this time. This was nice because I actually had some time to get myself together & say goodbye to my friends, who made cupcakes spelling bon voyage & bought me champagne & balloons!

So I packed my humongous red suitcase & I was off to the airport with ‘then-boyfriend’ (sounds a bit weird, I know but it’s the best phrase I can think of), his mum & aunt as they were visiting his sister who was at theatre school there. We were the last ones to the boarding gate (obviously – as well as clumsiness I am also blessed with an impeccable gift for being late). Just as we were about to get on, we noticed his aunt had left her hand-luggage suitcase somewhere in the airport. She ran back with his mum whilst me & him stood awkwardly with the person in charge of closing the gate. She was extremely agitated (not too comforting), & helpfully gave us a second-by-second countdown as she frantically tried to convince the people on the other end of her walkie-talkie to wait. Seriously, not comforting. We were completely frantic, debating whether we were supposed to get on without them or wait. Just as the woman looked over with grave, apologetic eyes, they came skidding round the corner in movie-style literally last-second timing. Unfortunately, this victory did not come without sacrifice as they were unable to find the suitcase in time meaning his aunt had nothing but the clothes she stood in. But, we got on the plane. Technically, we delayed take-off by, like, 6 minutes but nobody seemed to notice that was our fault so we kept quiet.

We arrived in Paris in the evening to a lovely, quaint little street in the more north of Paris around a canal. We went for a drink & had some dinner nearby & the next day we had a brunch of savoury crepes which were delicious. Me & ‘then boyfriend’ went up to Montmatre to see the Sacre Coeur & the little square with all the artists painting & doing caricatures. We stumbled upon a Salvador Dali exhibition right next to here which was really interesting & gave a me a chance to try & practice some (extremely rusty), French without embarrassment by attempting to translate the explanatory signs. Later on, we

headed back & met up for dinner near Jacque LeCoq Theatre School where we were watching his sister perform. It was an amazing performance of lots of sketches & small pieces which were comical & ranged between singing, clowning, absurd but basically really funny & a great night. Afterwards the audience & the cast all joined together & went for a drink in a very Parisian little narrow bar.

The hotel was next to a little canal next to where we were staying near (which was still quite near to Montmatre). We got up early & purchased some pastries in an adorable Parisian bakery & ate them whilst sitting along the canal in the morning sunshine. Once we had enjoyed our breakfast we got the Metro & went to see the statue at Bastille before walking along to the Notre Dame. As was expected, we had a long queue for just over an hour but we got to go up the tower & walk along the top (this queue is in the street at the side of the building & is shorter than the separate

queue to go inside).  The view was definitely worth it as we gazed over all the gargoyles at the fantastic panoramic view right across Paris.

Back on the ground (it was a long way down a lot of steps), we walked along the river & stopped for some lunch before heading to the L’Ouvre & bright, summery gardens. The museum itself was hours more to queue & we’d had enough of queuing for the day so we opted for the ‘Orangerie’ museum instead. This queue was much shorter & free to enter in you’re under twenty-five (as with many European cultural places). The museum houses Monet’s amazing waterlilies which are spread right the way around two circular rooms & I found breath-taking, despite not knowing a thing about art – definitely recommended! Having been out really late the night before & all the walking since morning, we were knackered by the time we’d seen the rest of the art & headed back for a quick nap.

We went to a Cambodian restaurant for dinner & tried just about everything on the menu & I thought it was all amazing despite it being my first taste of Cambodian-style cuisine. We finished dinner quite late & did a late-night metro dash to the Eiffel Tower. At night it is all lit up with lights like diamonds & sparkles on the hour. Just as we arrived, the clock struck midnight & the Eiffel Tower glittered spectacularly before us. The area beneath the tower was packed with Parisians, tourists, couples, families – even at midnight & there was a really special, yet chilled vibe. There were guys walking around selling beer, champagne & wine which was drunk from the bottle under the sparkling landmark. I couldn’t believe how many people were still around & before we got a taxi back we went to a little cafe/restaurant

nearby. It was hard enough to imagine it being still open at this time, never mind half the clients eating a full dinner at what was now 1am. Having already engulfed copious amounts of Cambodian food, we stuck to just a hot chocolate & éclair with the Eiffel tower still glittering above the rooftops.

Our last day in Paris began with a proper French brunch of croissants, pain au chocolat, tarts, cheeses, meats & baguettes, meaning we were consequently stuffed until dinner. We spent the rest of this day in the area called Opera (because of the Opera House), & went to Galleries Lafayette. This was the most incredible department store with gold balconies & a stained-glass, domed roof filled with beautiful clothes, perfume & jewelry. We had a cocktail break in a little square & looked on as the well-dressed french children were learning to roller-blade together.  Refreshed after cocktails, we wandered up to see the Arc de Triomphe before walking back along the Champs-Élysées. Our final evening was spent at the fanciest restaurant I’ve ever been to where the waiters couldn’t possibly expect you to do anything for yourself when they could have someone do it for you. We drank gorgeous wine & I had steak which was incredible (I have a habit of ordering steak, whether I can technically afford it or not [I can’t]).

Then, all of sudden it seemed, my Parisian adventure was over. I packed my ridiculously huge & unfathomably heavy suitcase & heaved it to the station to begin my summer in St Tropez.

0 thoughts on “Paris – When to See the Eiffel Tower Sparkle”