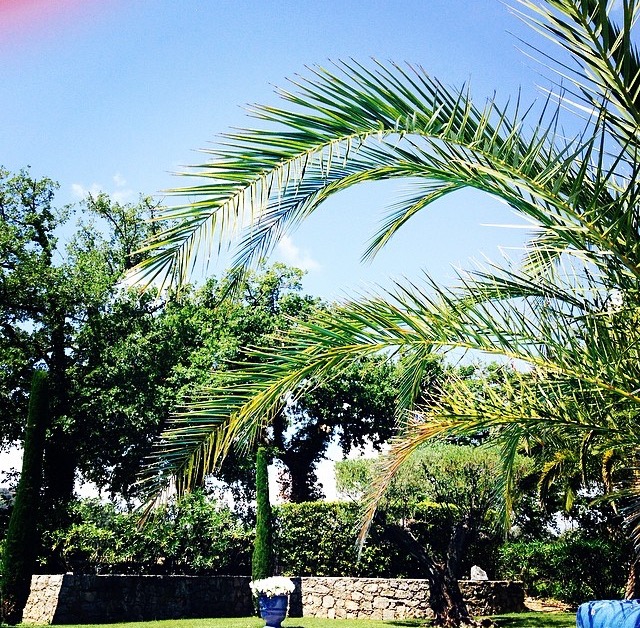 guests. I traveled straight down by train after my trip in Paris but my journey didn’t begin brilliantly. It took me 40 minutes to work out where I can get my ‘Print @ the station’ tickets & after my four hour train to Toulon where I was to change for Nice, there was an hour & a half delay. Luckily, the weather was beautiful so I sat on the outside seating of the station looking out over the sunny street. When I finally at my final station to be collected by my boss, I managed to get lost wandering up & down steps to various platforms before he came to find me (I’m excellent at getting lost & have little to no sense of direction).

Having left the hotel in Paris at 9.30, I didn’t arrive at the villa until nearly 7. For the first two weeks we were without guests as we had too meticulously (& by meticulously I mean I cleaned the inside of window panes with cotton buds for hours & hours & washed then polished each individual leaf on the two huge false trees in the living room), cleaned & prepared the villa. My role at the villa was basically taking care of everything that involves the household & general running of the villa

as well as covering service for the waitress when she needs extra help or a break.The chef & his wife also worked in Courchevel & lived nearby so came each day to prepare the most incredible food. Unlike Courchevel, however, where we had a ten-strong team, here there was just the waitress (I say ‘waitress’ but it’s six-star, round-the-clock, silver service) & a Thai lady to do housekeeping with me who lived onsite. We had a little cottage at the bottom of the garden which was tiny but adorable. It consisted of a one bedroom with one big bed & 2 bunks (I was on the top bunk – score), as well as a bathroom. We also had our own little terrace/patio with a table & chairs which was secluded by a bamboo fence to give us some privacy.

The communication between  staff members was always amusing. The lovely Thai housekeeper spoke some French but very little English. When she did speak English, she tended to fill the gaps in with broken French but still with a strong Thai accent. As we spent so much time together, we somehow managed to understand what each other meant & would translate for one another. The waitress & I spoke English (although Polish was her first language), & as the

chefs spoke only French, we developed a sort of sporadic English / French / sign language to communicate together. Looking back, I have no idea how we managed to run the villa between us, but somehow we got by (however comically).

Working seven days a week for 3 & a half months straight (apart from a 2 day break when one set of guests left early for personal reasons), meant we had to squeeze our nights out in when we could. The best time was normally Friday, so we’d get ready & have a few drinks in our cottage before walking into St Tropez town. On one of our first nights out, we were leaving at the same time our guests came back from dinner. To get out of the grounds, meant walking down the side of the villa & across the front of the driveway to the gate. As our paths were about to cross, we stopped & hid around the side of the building. We were obviously allowed out & could do what we wanted in our (admittedly limited), free time, but we didn’t want to impose & tried to keep professional as we’d had a couple of drinks. Our guests had also had quite a bit to drink & after ten minutes watching them try to unlock the front door, the waitress emerged from our hiding place acting professionally to assist them. They asked if she was about because we were going out, which she denied saying she just happened to be up (I don’t think they were

convinced). They tried to say they were sober & weren’t unable able to open the door, but just having a chat in the driveway (we also weren’t convinced). These events were sincerely amusing to us left hidden behind the door, stifling our laughter as we looked on at all the tipsy denials (neither party mentioned the events the next morning).

We used to start at Kelly’s Irish Pub at the far side of the waterfront as it had the cheapest drinks by far (if you call minimum 6 euros a pint cheap – in St Tropez, you do). There was another bar called Le Quai which we went to a couple of times & I remember making friends with two people who tried to teach us to salsa/tango dance (badly & over-energetically – I don’t think they really knew how to salsa or to tango), but mostly we stuck to a little tiny club. It is practical invisible but for an unmarked door along one of the windy little streets which you only know is there at night because there’s a bouncer outside. There was often also an electric violinist running between people & playing along to all the club & dance music which was really cool (If you ever watched Britain’s Got Talent, she was like the really posh girl called Lettuce). We also usually take a couple of bottles of Rose Beer (its pink!) & sit along the front by the harbour between places because its so pretty & chilled out. On the way home we knew a place where they sell fast food all night so I could get my BBQ chips on the way home just like England! We can walk into town for a night out and back home because it’s only about 15 minutes away (unless you stop for chips and BBQ sauce). Before we can get to the villa, however, there are two electronic gates which are at either end of an unfairly long driveway (which we never remember the code for so have to climb round the side of the gatepost).

If guests were out for most of the day, we alternated having a few hours off in the afternoon between us. Earlier in the season, I used to walk into the town to the little square of designer shops & have a cappuccino at Cavalli Cafe. It had white sofas & big, printed silk cushions but as it got closer to August it was just too hot to continue. My usual routine was to go to the little beach at the end of the road with some magazines & the book I was reading at the time (The Old Curiosity Shop by Dickens). Often the waitress & I would go together to Barbarac, who sell the best ice cream in the world (my opinion, obviously, but wow), & sit with our feet dangling over the front where all the yachts were moored.

About mid-way through our season one of our guests had to leave a couple of days early, so we got our first (& only), time off. We all went for a drink in the sun with the chefs but arrived back to a surprise visit from our manager who’d come to inspect what we’d been up to. Luckily, it worked out for the best as he gave me & the waitress a lift to Pampelonne Beach. This is the famous beach with the famous private places like ‘Club 55’ & ‘Nikki Beach’ where all the celebrities go. The beach was amazing, perfect sunny weather but

a breeze so we could stay there for hours and hours without getting hot & uncomfortable. We made a balsamic mozzarella salads, as well as taking peaches & a bottle of wine, which was all quite sophisticated (although we forgot a corkscrew so ended up bashing the cork down into the wine bottle with a fork & picking the bits out of our plastic glasses between mouthfuls – but the effect was still the same). It was an amazing day & we were there for hours & hours until the life-guards had gone off duty, set up & played a volley ball match & then locked up & gone home themselves. We ended up being there a little too long as our manager was watching the football and wouldn’t pick us up until it ended. Obviously it ended up into overtime & we were finally collected a little after 9pm, but we had an amazing time.

As lovely as Pampelonne beach was, the next day was even better as we were off to Monaco!