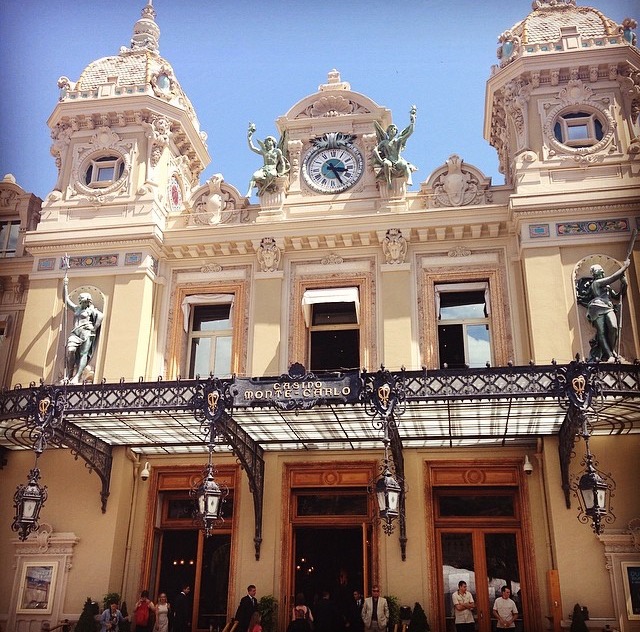 Having been living & working in a St Tropez villa, we were not used to time off. We had just two days off in my whole season & the second was spent visiting Monaco.

On the morning before we left, I made scones for breakfast with jam, butter, cream & strawberries & taught the manager’s wife & daughter how to make them as I went along. We left the villa at around 10am & arrived in Monaco around lunch

time. We parked the car & walked along by all the yachts before finding somewhere for lunch. We went to an American-style restaurant along by all the yachts called ‘Stars & Bars’ which is a Grand Prix / Formula One themed place with a car hanging from the wall & loads of driving suits & signed memorabilia. It was really good food & not too expensive, especially as there was a whole wall of photos with all the famous people who had been – everyone from Britney Spears to Andy Murray to Emma Watson (I’m a major Harry Potter fan). We went upstairs to the top of the restaurant to look out over Monaco through the window. It was a beautifully sunny day (as always), & the sun shone beautifully off the water & sparkled against the brilliantly white yachts which were lined up neatly.

After lunch we drove along the race track’s prime position & finishing line (painted onto the normal streets of Monaco which is where they race), & went up to Monte Carlo. The main square with the Casino had a fountain & rows of Ferraris parked outside as neatly as the yachts (in St Tropez every other car was a Porsche but in Monaco it was Ferrari). We

went inside Hotel de Paris which was right next to the Casino to see the domed, stained glass ceilings, chandeliers & incredible flower displays. The one in the entrance hall was astoundingly huge & beautiful.

There were designer shops everywhere – Louis Vuitton, Prada, you name it! We had a wander through & went into Miu Miu where we were shown the most horrible purple sequin dress for 10,000 euro!! I decided not to purchase that ensemble for the time being & headed down towards the beach. As we were walking along, there were stalls selling beach goods & towels. I looked at getting a towel as a souvenir, but at 50 euros I decided against it.

It was strange having a beach right next to all the buildings. The ‘sand’ strip was very narrow & slopes down towards the sea from the street. The ‘sand’ of the beach was also not what I had expected & was actually lots of very small grey stones. We lay out in the sun the weather was so beautiful & went for a swim in the sea to cool off. There was an increasingly drunk group of English bankers in the private club next to us who invited were

getting louder & rowdier (typical English!). They even asked me & the waitress to join but we politely declined. We stayed relaxing on the beach for the rest of the day & I did have a bit of a pinch-me moment when me & the waitress turned to each other & said ‘we’re actually spending our afternoon just lying on a beach in Monaco!’

Once the day was beginning to draw to a close, we made our way over to a place called Brasserie Monte Carlo. It was very chilled with a band outside. We got a couple of drinks & some bar snack-type food & they made their own beer which was actually really, really good. After we’d finished, we took a final walk around the harbour in the dark. All the yachts & buildings were lit up beautifully & it looked just like you’d imagine it to. We all piled into the car to return to St Tropez & everyone fell asleep on the way home (obviously not the driver). We returned back to our villa, & the teeny cottage we called home, around midnight.