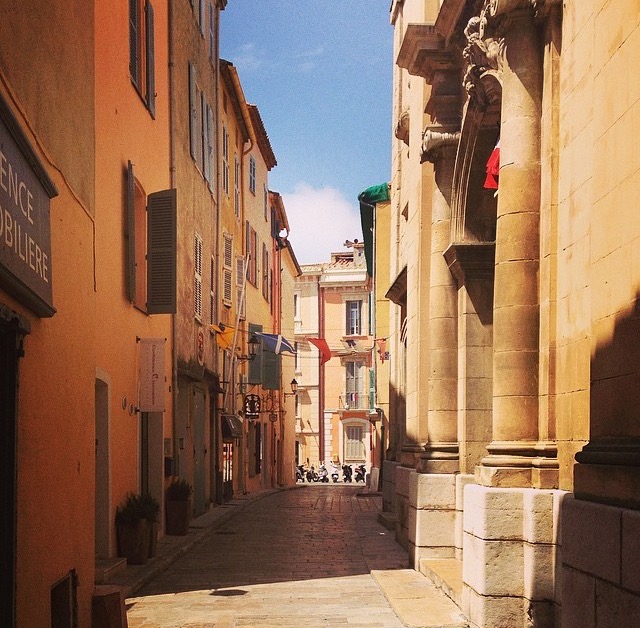 I moved to St Tropez for the beginning of June. We’d been lucky enough to get two days off, spending one on Pampelonne beach & the other in Monaco. On our last night before our new guests arrived, we decided to go out for dinner to a gorgeous Thai restaurant we hadn’t been to before. The food was truly beautiful & we sat on outside tables. The seating area was lit up with little lights & covered with canopies of bamboo. Myself, the waitress & housekeeper got a couple of bottles of wine between us & decided to finish our last night off in the town. We started at Kelly’s (of course), until it closed

& then went to Le Quai before our favourite tiny club hidden in the winding backstreets. The electric violinist was there again & she even let me have a go at playing it with her bow. We seemed to make friends with everyone from the St Tropez police force (the headquarters was practically next door), to another small group of clubbers, one of which (why, I have no idea) had a harmonica with him so we went dancing all the way home.

We soon settled back into our usual routine with our new guests & were completely booked up back to back until I finished the season. I’ve always been quite independent & good about not getting too homesick, but it was still nice to get packages sent from home. I was a bit worried because the postman cant find us so normally post is sent to the chefs house & he brings it over. Unfortunately, I wasn’t told this until about 5 days after two separate packages had already been sent. I did have a bit of trouble locating a couple of packages, but they turned up eventually. On of my friends sent me some makeup & chocolate I couldn’t get out here & my parents sent a large containing items from a list I had requested. This was the one that went missing for the longest, but it finally turned up at

the Post Office. I opened it to find my trainers, ipod, some toiletries & an open packet of 5 curly-wurlys, containing only four curly-wurlys & a note explaining my Dad had nicked one.

We had lots of different guests, mostly families as we had quite a big villa. We had a lovely Argentinian family, a British family & a big American family who were very friendly, loud &, well, American! There were two girls who were huge Harry Potter fans (just like me), so i told them all about Harry Potter Studios in London (where they were going next), & they got majorly excited & wouldn’t stop badgering their dad to take them as soon as they got there.They were lovely guests & they loved their stay so much they even rang our manager to tell him how good all the staff were & left a hand-written note addressed to the owner of the villa saying we were all wonderful (*halo sparkles*).

We always had very wealthy guests which often meant unusual requests for instance; only ever using white table cloths or napkins, hand-washing all of a guest’s shirts in cold water & drying them naturally in the sun, cans of diet peach ice-tea by the bed every morning & even removing all cushions, ornaments & curtains from the ‘Red’ bedroom (at 2am!), because the occupant (despite having chosen the Red bedroom), said they hated red (changing their mind the next day meaning I had to rehang the curtains again).

It was the birthday of a guest who was staying & his two daughters & they wanted a dinner at the villa so I went with one of the chefs to buy things for decoration. I chose masquerade masks for the girls, confetti cannons (which was literally like a

cannon with much more mess than I had anticipated) & put up balloons everywhere (which we tried to do secretly in the morning but every time they touched a light they burst with the loudest bang – we just kept apologising to him pretending we kept slamming all the doors by accident). It was a really nice dinner with a special cake on a platter with big sparklers and joke candles that didn’t blow out (he didn’t know these even existed and was trying to blow them out for ages until his daughters stopped laughing enough to explain what they were) & we all lined up and sang happy birthday. I’d also found those lanterns which you light & set off into the sky & got one each for the girls. None of them had seen them before so we helped them do them. Obviously, the first one went up perfectly & floated beautifully over the house into the distance, everyone taking photos. The second one started burning itself, wouldn’t light & then when it finally went up, it got caught in a gust of wind and blew straight into a tree. We tried to get it out with the pool net but all that happened was the bit that was burning fell into the trees & started a small fire which didn’t seem to go down, only gradually start to get bigger. It ended with the eldest daughter getting a fire extinguisher & blasting it out which, naturally, meant that it was then the ‘coolest thing EVER!’

Our most exciting guests were our last guests, who I am not allowed to name, but the waitress & I hosted a gathering for them at the villa with a couple of other well-known faces. They were our loveliest & most entertaining guests by far & delivered (& filmed), my Ice Bucket Challenge, before I returned the favour (I protested repeatedly insisting I couldn’t

throw water over my guests, but in the end they won).

Even when we’re busy working, we still managed to go out a few times, even if we did have the odd close call. Once, we came out of the club & saw it was light, but presumed that was because it was summer & it was probably about 3 or 4 am (we had to be at work for 8am with our guests at the time). However, as we started walking back, we were about 15 minutes away when my phone started going. I thought it was odd to be getting a phone call in France, before I realised it was my 7.30am alarm to get up. We looked around noticed that all the shops & cafes were opening for the days work & had to just go back, change & start work. Our chef thought it was hilarious & took the mickey all morning (although he did make me poached eggs on toast & a nutella pancake because I think he took pity on me!). On another night we & as I was never able to remember the code to the gate & too impatient to wait for someone who did,  I tried to climb round the side of the gate as usual. The side of the gate leads to a drop a little above twice my height into a ditch in the trees. Having had a few drinks to add to my ridiculously clumsy nature, I managed to slip down

& dangle over the edge, hanging on desperately to the gatepost. Obviously, it was absolutely hilarious to everyone, including me. I was seriously starting to slip, but laughter made me too weak to pull myself back up & I was left hanging precariously there for a while until the other two stopped laughing long enough to heave me back up. I was probably reminded of this at least twice a day thereon.

On Bastille day there was a a big firework display on the bay across from us. The beach was full of people with little fireworks & sparklers watching so we took a blanket & a bottle of wine & watched them from there. On one occasion we had enough time to do a little boat tour around St Tropez & the surrounding bays. There was also a really cute market in

the square of St Tropez where I used to have a little wander with home-made wares & it was very cute.The food I became accustomed was (now depressingly), amazing; foie gras, handmade sushi, various types of caviar, langoustines, truffle, wild alaskan salmon, steak, scallops, rabbit – I tried it all.

All too soon my time in St Tropez was coming to an end & it was time for me to pack up my humongous red suitcase once again. I was off to London for one night before flying straight to Athens where I was to host a yacht, so it would be another week until I was home again. I waved goodbye to my little cottage & trundled down the gravel pathway for the final time & waved goodbye to St Tropez from the coach to the airport.