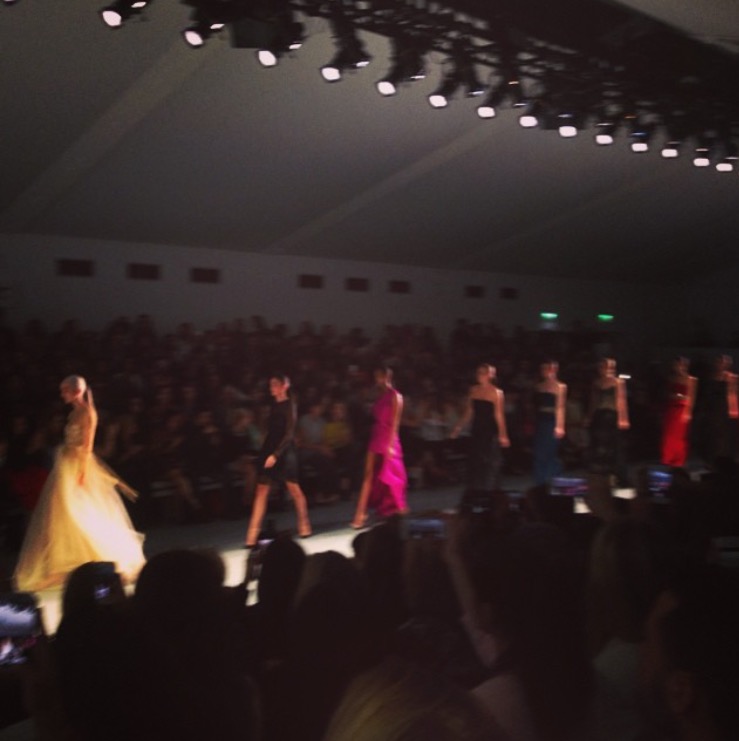 After a year out in Courchevel & St Tropez, it was finally time for me to move to London & start university at King’s College London.

My first year at university has been amazing. London truly is a vibrantly alive, quirky, cultural & yet quickly homely city. My campus was on the Strand, so I came to (almost), get to grips this part of London with winding Covent Garden, Fleet Street & Trafalgar Square as well as ‘up & coming’ Elephant & Castle, where my halls were.

One of my first experiences of London, was being thrown into work at London Fashion Weekend (LFWE). This is the current-season event which immediately follows LFW where people can purchase tickets to see catwalk shows, industry talks & most importantly: shop! I’ve done a few events now with the British Fashion Council & they are always loads of fun & really interesting, although my feet have to pay the price in pain! The two LFWE events I was involved in were held at the beautiful Somerset House which is literally attached to my campus  so

even I was able to find it. My highlights were definitely being lucky enough to attend the Marchessa Notte show, as well as witness Amanda Wakeley’s beautiful designs on the catwalk &, of course, working with my childhood bestie, Anna, who interns for the BFC.

How to get into a catwalk show? Work for one!

Aside from the unexpected bonus of my best friend from across the street moving to London & working 3 metres from my lecture halls, I did manage to make some new friends (on an initial & now recurring basis of cake bribery, but I like to hope they’ve warmed to me all the same). The ‘fam’ in my halls really did become my second family & it felt like we were living some sort of London, student version of ‘Friends’. Our little 606 flat consisted of myself, another Beth (nurse), Bobbie (Engish), Anand (medic & chief Matar Paneer maker), Tasha & Hannah (both biomed). We quickly expanded to encompass medics Saaj & Alex as well as RLA/ biomed third-year, Shaan & the 604 girls Sophie, Sarah & Siobhan (if this sounds a lot now see London (Summer) & the inclusion of a whole new flat – we were clearly a coveted group to join).

Without that lot, my time in London would have been nothing. Throughout our year, we

had some great night outs. Living within a few minutes walking distance to the Ministry of Sound & The Coronet was (sometimes a bit too), handy & the KCL Guy’s bar nights always culminated in interesting anecdotes (Saaj…*cough*). We usually had prinks (pre-drinks), in our flat before going out, but after missing many buses / ticket-selling / entrance deadlines, we ended up having an increasing amount of flat parties instead. These almost always resulted in singing to Frozen & various childhood musicals (looking at you, Alex), frequent (& accordingly graded), chunders, occasional semi-nakedness & once a rather bizarre escapade involving approximately 50 metres of bubble-wrap.

When we weren’t being archety

pal students, we actually did do a lot of cultural & beautiful London-y things. One of the most different things I experienced was ending up on the front row of the red carpet with Bobbie for the premier of ‘What We Did on Our Holidays’, thanks to an opportune chat with a friendly security guard. Billy Connolly, Rosamund Pike & the cast of Outnumbered were there & we both got David Tennant’s autograph (might as well admit it now – I’m a huge Doctor Who fan almost as much as I am for Harry Potter & as he has been in both,

I was a little bit excited to say the least). Slightly less show-biz but still loads of fun was an amazing Jack the Ripper Tour I also did with Bobbie. It was was free, just with an optional tip for the tour-guide at the end. We traversed around the East-End of London on a wet & gloomy winter night, the foreboding atmosphere initiated, & somewhat enhanced, by our Tower of London meeting point. The Natural History Museum is also actually really cool & the giant dinosaur

skeleton in the entrance feels like you’ve just stepped into ‘Night at the Museum’ (I will admit I got a bit over-excited buying a sippy-cup in the dinosaur shop & left my boyfriend’s wallet on the store shelf…oopsy). The Science Museum next door is equally awesome &

has loads of interactive stuff, if being difficult to navigate (although I do suffer from a horrendously poor sense of direction, so that could have just been me). Of course, I have visited the Houses of Parliament, Big Ben, Westminster Abbey & Buckingham Palace, particularly whenever friends came to stay, if only to provide the proper ‘London’ experience. The Sherlock Holmes Museum is amazing, especially if

you’re familiar with the books. A sign outside Baker Street Station says simply ‘221b’ with an arrow pointing in the direction of the museum, as if proving how renowned the character & his address have become. King’s Cross Station also have a wall for ‘Platform 9 3/4’ where you can queue to get your photo taken pushing a Hedwig & trunk-laden trolley with a Hogwarts scarf around your neck.

Whenever it was time for some proper shopping, Oxford

Street really can’t be beaten (or Regent Street if you’re being / pretending to be fancy). Sarah was always my go-to shopping companion & our tastes were so similar we would literally find ourselves gripping opposite sides of the hanger as we both reached for the same (probably black), item. Carnaby Street is also very cute & Moosh do a yummy peach juice & loads of smoothies. I personally love Covent Garden, it’s always good for a wander & the Battersea Pie Shop’s

mini pie & mash is the best thing ever & perfect meeting place if there was ever a lunch-time gap between lectures. One of my real favourite places to hide-out though, was (& still is), the Pret on Fleet Street opposite the Royal Courts for Justice. I used to go in after an earlier seminar when all the pastries were fresh & hot from being replenished after the breakfast rush & chill out with a book. Abokado also does the best value hot, delicious &

healthy food & I used to nip over during library days at the Maughan on Chacery Lane.

In the evenings, my hands-down favourite place to eat ever is Steak & Co in Leicester Square. One of the best things about my year at university was meeting my amazing boyfriend Shaan, who introduced me to this restaurant. He also took me to Hagaan-Daaz

to celebrate the end of my exams, which is my dream restaurant as it is devoted solely to puddings (please note that the ice cream scoops are much larger than you think & 4 each is way too many!). Unfortunately for our student salaries (aka student loans / gap year savings), we have rather expensive taste, but still manage to splurge every now & then. For our first date, we went to see Wicked which was just incredible & walked back along Southbank under the lights of

the London Eye. At Christmas there was a market all the way along here, complete with a huge beer cabin & Christmas tree maze as well as an ice-rink.

Christmas in London is truly magical. Somerset House transforms into the most famous & recognisable of the ice-rinks with a huge Christmas tree & the square all lit up. Even by bonfire night, there was a festive note in the air with Southwark

Park’s firework display & fair which I also remember as it was mine & Shaan’s first group outing ‘together’ (is okay to hold hands when we’re in a group? Should I be walking with the girls instead? lolz – weird how your brain worries over stuff I never had, & haven’t since, considered). Being the true ‘fam’ that we are, we always had family night, which was always Monday. This was when we’d pile up to around 20 people into our living room for homemade cakes (courtesy of Bobbie & I) for our weekly installment of Broadchurch. As the festive season approached, we knew we couldn’t let the winter season slip by without having a proper Christmas of our own.We went all-out (organised by myself & Bobbie – as most food-related things tend to be), & had a whole

weekend of celebration. We cooked a massive Christmas dinner for 16 between the two of us (Yorkshire Pudding credit to Sarah & credit for the very unique & tinsel-covered chocolate log to Sophie & Siobhan). We had two roast chickens, Quorn roasts for the vegetarians, millions of roasties, pigs-in-blankets, honey-roasted parsnips, sprouts & bacon bits, all the vegetables you can think of, cranberry sauce, gravy & apple crumble – every bit of it made from scratch & neither of us had ever made a roast before (*pat on back*). We then dressed up the most reluctant Santa ever to walk to earth (Anand), & all gave each other our secret santa presents. The day after we had our own boxing day. This involved covering the whole floor in cushions, pillow, duvets & blankets whilst watching films on the projector for around 15 hours straight (we started with Elf & somehow ended up with horror films – this tends to happen whenever we try watching movies as a group).

Going back home over the Christmas break, I really missed the fam. However, I can’t complain too much, as I did end up with three Christmas celebrations. Our uni fam weekend, home family actual Christmas plus a weekend away with Shaan for our own mini Christmas in Colchester (I love Christmas on a level to rival Buddy the Elf – this may have come across).