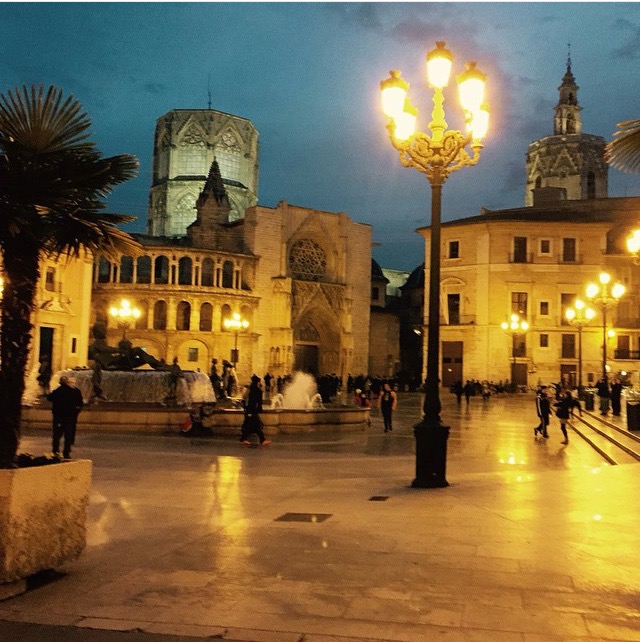 Our trip to the beautiful Valencia was a very nearly well-kept surprise from Shaan for Valentine’s Day. We left from London Gatwick, having spent so long choosing Shaan sunglasses that we were last in the queue to board

& didn’t even have time to buy snacks in the airport (don’t worry, we got a muffin each on the plane). Unfortunately, our tardiness also meant that there was no space left for our hand-luggage suitcases & they had to be put into the hold. Luckily, we didn’t have too long a wait for our suitcases on the other side & got a taxi to the Air BnB apartment.

We arrived in Valencia Old Town where every other element of our trip was still completely unknown to me, including the apartment. It was stupidly beautiful. It was a tiny studio penthouse with a mezzanine to sleep on and windows all the way down one side onto the

patio, which was almost the same size as the apartment itself. Wide rays of sunshine streamed in every morning & the view we had was breath-taking, scanning right across the sun-baked roofs of Valencia.

As a special welcome, our hosts had left us a little bottle of champagne, some chocolates & local oranges. We settled ourselves into our apartment & then went off to explore. We wandered around the higgledy little streets between squares & found the

central market. The huge construct was made of glass & stained- glass windows, housing all manner of stalls for fresh bread, squeezed juices, meat, fish & wine. For dinner, we headed to a little restaurant / bar in a nearby square & had a few small dishes consisting of ‘patatas bravas’ (squares of fried potatoes in a pink, very lightly spiced ‘bravas’ sauce) & a trio of miniature hamburgers. We ate in a large, low ceiling-ed but candle-lit chamber full of alcoves with vintage posters & décor of Spain.

Valencia is an amazing city for cyclists. Bikes are available to rent just like ‘Boris Bikes’ in London, where you pick one up & slot in into whichever bike-station is closest to you when you want to stop. ‘Des Jardins’ run right around the city & is essentially a very wide strip of

parks which run like a stream, a level lower than the buildings themselves. People cycle up & down all the way along & as there are no cars to worry about, it’s safe & easy to get around. You can also cycle around the little cobbled streets between squares & orchards & fountains, but exploring on foot is just as beautiful. There are lots of religious buildings which are both grand & ornate. We even went to a Spanish service in one of the churches & the incredible architecture coupled with the beautiful language of Spain was an amazing experience.

The whole time we were there, it seemed as though we were looking at everything through apricot-tinted glasses; there was just this warm, sun-drenched glow
which radiated from every surface (extremely like the ‘Valencia’ filter on instagram).

On Valentine’s day itself, we had breakfast together on the balcony with chocolate pastries we had bought from the central market before taking the bikes all the way along to the science

museums (maybe not traditionally romantic but we loved it!). There was a little group of grand, modern buildings surrounded by a little stream of water & it honestly looked like the set of a science-fiction movie. The juxtaposition from our sun-beaten cobbles to this futuristic island of what looked more like docked space-ships than museums was pretty disparate. The main museum itself (you can get various tickets for different sections/ buildings), consisted of five stories & had loads of different interactive exhibits. One of the most amusing was this miniature sort of crazy playground of equipment to test balance (of which, we deduced, I have none). We thought it would be funny to film each other, but Shaan didn’t have a problem with

any of the balances so it was only actually me that ended up looking like an idiot. There was also a set of phones which you could talk to each other on & turn a dial to distort your voices as you spoke to one another. We spent a while on that one.

For our Valentine’s evening together, we dressed up a little bit nicer & headed out to find a restaurant. I’d left Shaan in charge of the money & (despite a long [filmed in evidence] conversation down the stairs about making sure he had it on him), he forgot to get enough for dinner. We realised this when we had had a nice wander through the town & finally selected a lovely restaurant, only to then have to

go all the way back & do it all over again. We chose a tiny restaurant down a side street & had a little candle-lit table on the cobbles. We were given blankets to tuck over our knees whilst a classical guitarist played softly in the background. Shaan ordered lamb & I had the Valenican Paella which was gorgeous & contained meat rather than seafood. We headed back slowly to our apartment after dinner, stopping for a bottle of wine on the way home & finished our evening back on the beautiful balcony with which the day had begun.

On our last day we had a long lie-in, soaking up our last rays of morning sunshine

which streamed right the way through our apartment every day. After packing up (Shaan helped by knocking a wine glass from the high-mezzanine, meaning it smashed all over the floor & across the base of the ladder so that he couldn’t even get down to clear it up), we walked through the orange trees to our favourite square where there we sat on the steps with ice creams by the fountain & watched the world go by. We chose a cafe on the corner to have our last lunch together in the beautiful city. Then it was time to head off to the airport, but not without a final treat with an Uber Exec waiting to greet us & take us home again.