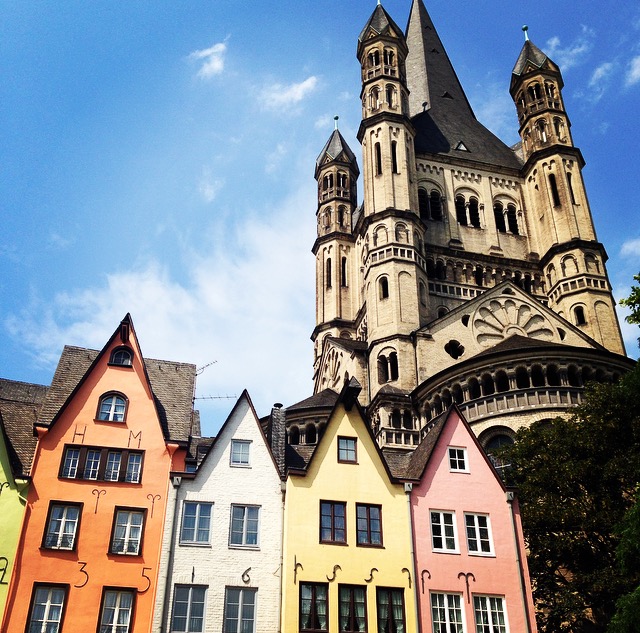 Myself and two of my childhood best friends, Freya and Jess, had decided to go interrailing and began our adventure on the 6th July from Manchester Airport. ‘Interrailing’ basically entails travelling across Europe from country to country using a pass which provides passage on various trains, buses and ferries across the continent. We had a rough route planned but decided to organise hostels and specific journeys as we went along to allow ourselves more freedom to move around as we pleased.

Our first stop was Cologne, Germany. Our first couple of night’s stay here we had arranged in advance and it took the form of a large studio room in a residential area about a 30 minute walk up the river to the old town centre. We had a huge double bed and a corner sofa along with a little kitchen, bathroom (sporting a bizarre cat face toilet-seat), and a little balcony.

The reason we chose Cologne? It was a £20 flight. It also turned out to be loads of fun & a really great location (like, geographically speaking) to start our inter-railing trip.

We quickly changed and headed off to explore. We started along the Rhine River where there were lots of modern buildings for modern technology and car brands. As we progressed further

along we came to the older buildings and museums and the ornate yet gargantuan cathedral, with all its intricately carved towers and features. Outside is a large fountain in the square so we had a little paddle (it was really hot) and wandered in the sunshine past the museum squares and designer shops before going back along the river to our apartment.

As we were trying to do as many countries in as little money as possible, we decided to make good use of our kitchen whilst we had the opportunity. Picking up some pasta, tomato puree and slices of cheese, we ate our little meal on the balcony as the sun went down before having some drinks as we played cards into the late evening.

Not knowing where was the best places to go, we enlisted the help of a lovely, local taxi-driver who told us he was planning to travel to England as part of an ERASMUS scheme. He took us to street with lots of bars and we ordered some drinks to relax outside with in the warm evening with. (We also did a little people-watching and were highly amused at a grown man’s light-up trainers which he seemed to be actively parading around).

On the way home, we stopped by McDonald’s, where Freya and Jess both bought the odd (but surprisingly delicious), German option which was a fish burger with bacon and caesar dressing (honestly, it was so much nicer than it sounds!). We then proceeded to get ridiculously lost as we wandered around the town centre. However, the evening was warm and the city was pretty at night and we did eventually surrender our efforts by jumping a cab back (we were still miles away).

The next morning we wandered along the river again and came to our ‘Hogwarts’ place (we’re all huge Harry Potter nerds),which was a row of Balamory-style multi-coloured buildings with a grand ‘Hogwarts’ building behind. We sat here beneath the trees and over-looked the Rhine with our ice-creams. Heading further in the direction of the Cathedral, we found a sort of urban stream with little rises and dips which children were playing in and people walked through bare-foot to cool off. We followed suit and picked between the square cobbles and little rushes of cool water dangling our shoes in our hands. This led us back up to the Cathedral, where we sat and people-watched as tourists tried all manner of poses and angles to fit both themselves and the building in behind them. The most amusing was a man and his wife bickering as he tried to take a low-angle selfie (aka the thumb angle) – his wife was having none of it and his bewilderment was highly amusing.

If you’ve ever been to Paris (and doubtless many other cities have similar), you may have seen the famous bridge full of padlocks.

I have also seen this, but the Hohenzollern Bridge in Cologne had more than I could have ever imagined. Every centimetre was covered with padlock after padlock. Some of them had been engraved commercially with ‘Mr X and Mrs Y, Cologne, 2011’ etc, others were more crudely initialed with presumably whatever sharp implement had been to hand and others had either been marked with ink or left blank in romantic mystery (or lack of any of the above resources).

and a little very ‘German’ pub. The landlady was lovely told us about the show she puts on every Christmas (there were already posters up advertising for the 2015 round – it was July), in which she retold the birth of Christ wearing Ringo Starrs’s jacket circa Sergeant Pepper’s Lonely Hearts Club Band (don’t worry, we didn’t get the connection either). So if you were ever wondering what Jesus Christ & the clothing of a Beatles’ member share, it is the affection of this bizarrely wonderful lady. But we couldn’t fault her enthusiasm, particularly when she found out we were from very near Liverpool, or her food. We asked her what she recommended

and she brought out three plates of Currywurst and chips. This was a German frankfurter sausage with a sort of spiced gravy-like sauce, a sprinkle of curry powder and crispy onions along with a side of chips. It was one of
the best things we ate our entire time away and was a million miles better than what you find at the German christmas markets in the UK (or the ones I have eaten at, anyway).

That evening we had a few drinks on the balcony again before we went to meet a friend of mine who lived in Cologne. We met all the way in China years ago so it was crazy catching up again after all that time! He took us to a bar for a couple of local beers before we sat on the wall of a little courtyard chatting with shots we bought from a little

corner shop next to us. After it started to rain, we headed to a bar/cub where we bumped into a couple of his friends. We had a great night before it was time to taxi it (we weren’t gonna risk getting lost again when it was raining), back to our apartment for the final time.

Waking up at what felt the moment immediately after we had just laid down, we had a blurry-eyed dash to get our back-packs together and the apartment into reasonable order. Missing our original pre-booked taxi, we had to negotiate another one and send Jess down to hold it for us. We waved goodbye to our little house as the taxi pulled away towards the station and off to catch the 8:42am train bound for Berlin.

One thought on “Cologne – What Christ & Ringo Starr’s Jacket Share”