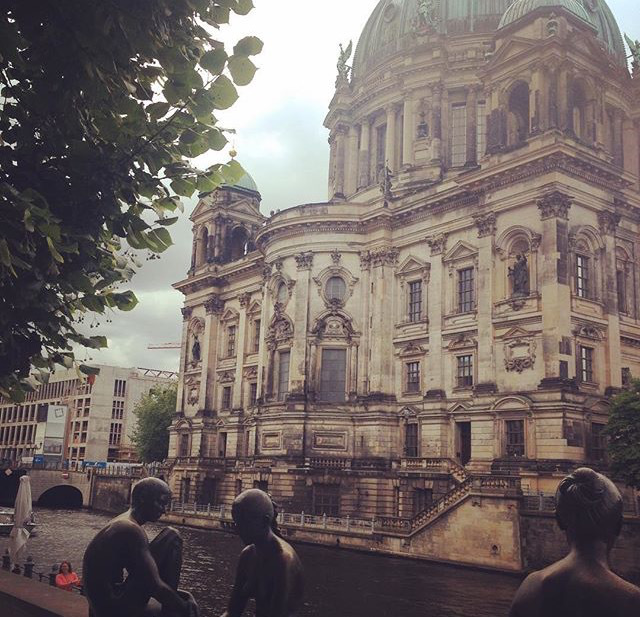 The aforementioned 8.42 train (from Cologne), was a bit of a rush, but we made it. Being cheapskates, we didn’t bother paying extra for booked seats. Unfortunately, the person I nabbed the aisle-seat next to appeared to be best mates with every other person in the carriage. Like, everyone.
As he was squashed into the window-seat, his many companions would come & stand, leaning over me, having a lengthily chat in German as I tried to look comfortable & as non-awkward as possible. His BFF decided to store his brief-case & water-bottle in the aisle next to me & appeared to be particularly thirsty, hemming me in on my free side every ten minutes or so (JUST TAKE THE BOTTLE WITH YOU).

My unfortunately popular neighbour (who never so much as glanced at me, never mind said hello – I don’t know how he got so many mates in the first place), however, was not the least of our problems. During the first

couple of hours of our journey, ticket-collectors went past every now & then to ask us (in English), to check our passes. Then our train begin to slow to almost a halt, before starting again. Then it did it again, then again & then it just stopped. There was an announcement in German to inform the passengers of what was happening. They didn’t follow it up in English, but after half an hour at a stand-still & people jumping off for a smoke, we figured we were probably delayed. Interestingly, the English-speaking ticket collectors didn’t come round for the next two hours, so we to this day have no idea what the cause was. However, when the announcement that we would be on the move again shortly came, they gave that in English & the ticket-officers were back on their full rounds again. Funny that.

We were staying on the east side of Berlin with my cousin (Rachel) who was studying there. We had a bit of a palaver concerning the lost key to the apartment after we’d arrived (it was left on the outside of the door so was obviously likely to have been snatched by a looting mass-murderer), and

after a quick round of the neighbours (one of which peeked naked around the door-frame) we pressed pause and went to explore.

My first impression of East Berlin was, basically, bonkers. The buildings had an artfully disheveled look & were caked in graffiti, which somehow worked & added to the laid-back vibe. We passed a 24 hour clubs, a sand-strewn, deck-chair-decked beach bar, a ‘Lidl’ & a band of eccentric twins. All the people seemed really cool. Like, the coolest, genuine indie/hipster person I can think of multiplied by ten & that’s the kind of level we’re getting at here. There were also lots of German Shepherds, genuinely. It was pretty awesome.

We finally made our way up to Burger AMT (a local pun), which did not disappoint. I think my stomach had actually begun to digest itself I was so hungry but I had the Chill-Cheese

Nacho Burger with guacamole, whilst Jess & Freya both got the Guacamole Burgers. We ordered a huge plate of chips to share with Peanut Sauce (BEST. THING.EVER), & Chilli-Cheese Sauce as sides. Hugely recommended & the place itself is (obviously), pretty cool.

We took a detour to see the Berlin Wall, East Side Gallery on the way back. The wall had been covered with incredible art-work by street-artists & it was particularly spectacular. For some

reason, the Berlin wall in my mind looked like a smaller, somewhat crumbling version of the Great Wall of China. In reality, it was hugely tall & seemed to span forever in length.

The next morning we took the train to the city-centre. The East side of Berlin seemed like another planet. The buildings here were grand, well-featured & a world away from the functional (albeit graffiti-charmed), constructions on the other side of the city.

The contrast between East and West Berlin, even now, echoes the two tales of the same city’s past.

We made our way to the many, many, many museums which had their own island in the city & each one had the most amazing architectural housing for their artifacts. We made sure we went into true tourist-mode & took plenty of photographs of all the buildings & statues in attempt to capture

the contrasting charm of the city. We did this between the sporadic downpours, which forced us to run from shelter to shelter as we clutched maps over-head in the absence of umbrellas.

Thankfully, the rain subsided & we met Rachel outside the beautiful Humboldt University buildings as she finished her classes. She played tour-guide & took us to the famous Brandenburg Gate which is one of the most recognisable landmarks of the city which now represents the unity of East & West Berlin since the Berlin Wall came down. Consisting of grand pillars & topped with a statue of a horse-pulled chariot it is classically majestic.

In contrast to this building, was the Holocaust Memorial. Large, black blocks of varying sizes stretch out across uneven

cobbles. There is a stark, bluntness about the pieces which spread out to a juxtaposing cushion of trees. Underneath is a museum & people wound around & between the blocks, mostly in quiet contemplation. One man beamed with a ‘selfie-stick’ as he strolled amoungst the memorial. Another girl, around my age, leaned against the structures to pose this way & that, her friend using a camera-phone in a make-shift photo-shoot.

For dinner, Rachel took us to try ‘spaetzle’, which is a German comfort food & like a potato version of macaroni with toppings. We all ordered the same, which was a ham & cheese (like carbonara), spaetzle. The portion was enormous, one would likely have done the four of us, & seriously

(slightly over-), filled us up. That evening, we joined Rachel’s flat-mate & her guests for a few drinks before heading out to a little bar to meet some of her friends. We had some more drinks & chilled out until the bar closed & we headed off to a bar/club. It was in a sort of glass fronted box which appeared to be the old security/ look-out tower of an abandoned car-park or something similar. Definitely something I hadn’t seen before.

Our final night was rudely terminated by the abrupt screeching of phone alarms (namely, mine) as we gathered our possessions & headed back towards the station for another pre-9am train, but this time for Prague.

2 thoughts on “Berlin – Why Berlin is Basically Bonkers”