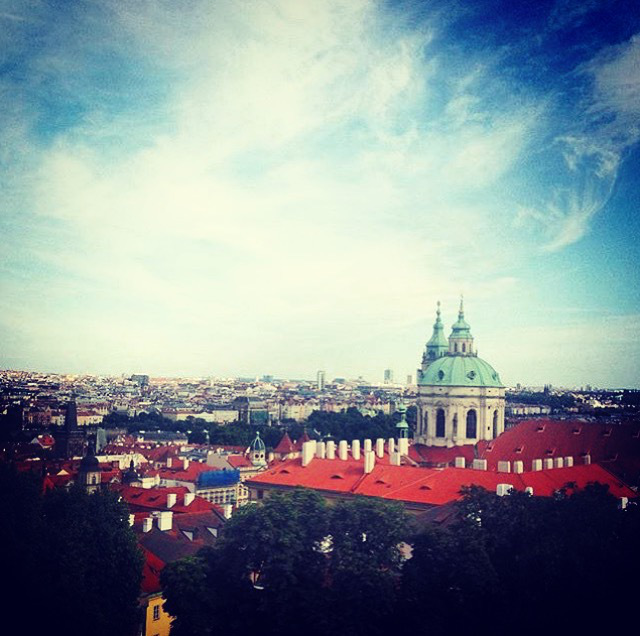 Our journey from Berlin to Prague was better than our one previously (& miles & miles better than the journeys we unwittingly had to come). Unfortunately, it immediately followed a night out & we were feeling pretty rough. I had hoped this wasn’t too obvious on appearance.

Ah. Apparently it was pretty obvious.

These being the first words spoken by the person I sat down next to as I boarded the train, I figured I looked as dead as I felt. On a much happier note, I was sitting next to a lovely Canadian DJ who was travelling & playing at nightclubs all over Europe. It was great to sit next to someone who was actually willing to speak to me & conversation definitely made the journey go faster (as did a long nap, of course).

After being ripped off in for a taxi journey to a hostel I had accidentally booked for the wrong weekend, we finally checked in to the last room of

a hostel called Emma. We had one of five rooms in an apartment-style set-up with a kitchen, two toilets & a bathroom with two shower cubicles. It was close to the centre, cheap & easy to find with a private room, so we were happy.

Prague itself is beautiful, we fell in love with it instantly & even decided to ask for an extra night so that we could stay longer (the beauty of booking everything as you go along). The river winds through the centre of the city & bridges join each side to the other & an island in the middle. Pedalos meandered up & down

the river & the sun shone all the days we were there. We often relaxed on the sloping lawns of the central island watching the little paddle-boats go by. Hot dogs of huge, chorizo-style sausages with crispy onions & mustard squashed inside proper baguettes were our favourite things to eat. Kozel beer from a massive, glass stein with lots of froth was a also a given, for me. The streets are also more huddled

together, into cobbled squares & winding passages, which helps give a more quaint & traditional feel to the old city.

The first night out in a new place is always tricky. In the past, we had gained success in simply asking the taxi driver to take us to where he thought would be good. We tried this tactic again.

That is what we thought he said, anyway. Figuring he had guessed we wanted a club which would be good for young people on a night out, we agreed happily & thanked him greatly as he dropped us off. We seemed to be outside a shopping mall & following the sound of the music we realised what the taxi driver had actually meant.

Remaining optimistic (I’m a big 80s fan), we begrudging handed over our 5 euro entrance fee (we didn’t know anywhere else to go & figured that as we were already here we might as well try). Our optimism was tragically short-lived. We were the youngest in there by perhaps 20 years. I’d say I could give a fairly accurate guess, as the club’s expected darkness was broken garishly by large projections of the most random assortment of music videos I’ve ever seen (didn’t know a single song), meaning that you

could see every feature of every person right across the club. & their dance-moves. We had a good laugh but after half an hour we decided we’d taken the mickey long enough & decided it was time to find a ‘normal’ bar.

We found ourselves wandering towards the main square & asked a bouncer where would be a good night out. He started giving us lengthily directions until we asked what the club he worked at, directly behind him, was like. He stopped for a minute, spoke to a girl by the door & then had our hands stamped to get us in for free (yay).

We climbed the stairs to the top floor of a club called Duplex, where high platforms staged two dancers & another spun in a hoop hung from the ceiling. There was also the added bonus of the people in there being generally much closer in age & the only illumination was the flashing of coloured strobe-lighting. It was an amazing & hilarious night-out, mostly due to a shot of absinthe tipping Jess just over the edge. The most amusing of incidents being when she tried to order a ‘cocktail’ from a list
of scheduled acts due to play over summer. It was an events leaflet, not a
drinks menu. (I kept it, not letting that be

Back at the hostel, Freya drifted happily off to sleep as I got ready for bed. Unfortunately, Jess wasn’t exactly feeling great & was sick quite a bit. This, however, became an event even more amusing than the cocktail incident. Complaining of the smell of sick, we sprayed everything with a very sweet body-spray in hope of disguising it. Unfortunately, the scent was too strong & made Jess feel even worse. Me, still a bit drunk & not quite listening, presumed she was still complaining about the smell of sick. Being the ever-helpful BFF, I positively doused a tissue in the body-spray thinking it would help block the sick smell out. Jess covered her nose with the perfume-covered tissue but kept shouting that it wasn’t working & that the smell was stronger than ever. She hadn’t seen me douse the tissue & presumed it would act as a neautraliser to block out the overpowering sickly-sweet body-spray. Therefore deducing that the smell of the spray must be on her hands, she lay the tissue out on her pillow. Balancing her nose on it, she held her arms out & behind her as far away as she could, as though trying to glide, Peter Pan-style, out of the open window.  All the while she is still screeching incredulously,

It was only then that I realised that it was the smell of the spray she was trying to avoid & that I had made the situation infinitely worse. It took me another five minutes of crying laughing before I actually managed to help her.

There are lots of places to go out in Prague & even just wandering around is a good laugh. We had a long conversation with a German stag do who greatly promoted the beauty of Frankfurt’s trees & bumped into a group of guys searching for a strip-club, one of which had just been admitted to my university (I don’t exactly remember how the conversation digressed in that direction but he seemed very nice). Interestingly, we knew exactly where the strip-club was. We had just dived into what seemed like a normal bar to use the toilet & were admitted free with the promise of a free shot (seemed too good to be true). As we were walking up the stairs we noticed that there seemed to be a lot of men inside but not many women.

No, look, there’s loads of girls over there…oh. Guys, I think we’re in a strip-club

When we weren’t discussing foliage with Germans & stumbling into strip-clubs, we actually did some very lovely, culturally Prague-ish things.
Boat tours operate all along the river & ours was both beautiful & calming (so calming, in fact, that Jess even fell asleep). They all offer various
packages & deals & if you smile sweetly enough you’ll be able to wangle a

discount. Strolling across the main bridge provides a beautiful view along the river & at the grand statues & archway leading onto it.  There are painters, musicians & caricaturists providing a rich ambiance for a sunny stroll along. We crossed over to the other
side of the city which was more traditional & perhaps even prettier than the side we had come to know already. The castle is also a a beautiful sight with an amazing view and well worth all the steps!

In terms of evening meals, we were quite varied. On one of our earlier days, we took the advice of a boat-trip salesman & headed to the long, wood-beamed basement of a pub. They recommended a huge plate of mixed meats & what was like doughy bread or sliced dumplings with a jug of salty broth. Not sure I’d have it again, but it was a bit different & felt like a proper medieval feast. Making use of our kitchen, we bought a couple of oven pizzas from the little shop across the road, the owner of which had patiently attempted (albeit with a fair racket of sighing), on sometimes twice-daily occurrences, to work-out our currency for us. On our last night we decided to go out for a nice dinner. We went to an American-style place on the corner of the squares & (after very, very slow service), we all order the oh-so-amazing-sounding BBQ &  blue-cheese baked ribs & a side of chips to share. What actually arrived was the five of the smallest ribs I’ve ever seen with two tiny bowls of dip. One BBQ, one blue cheese. The ribs were dry & the plate was filled with gem-leaf lettuce leaves & a cardboard chunk of not-very-garlic

bread. It worked out at 18 euros each. A part of me died that day.

But that was our only down moment of one of our most wonderful, hilarious, vibrant & beautiful cities (Prague & Budapest are the tied & much debated favourites of our trip). We were so glad we got to extend our stay & sad to say goodbye as we packed up once again, this time for Vienna.